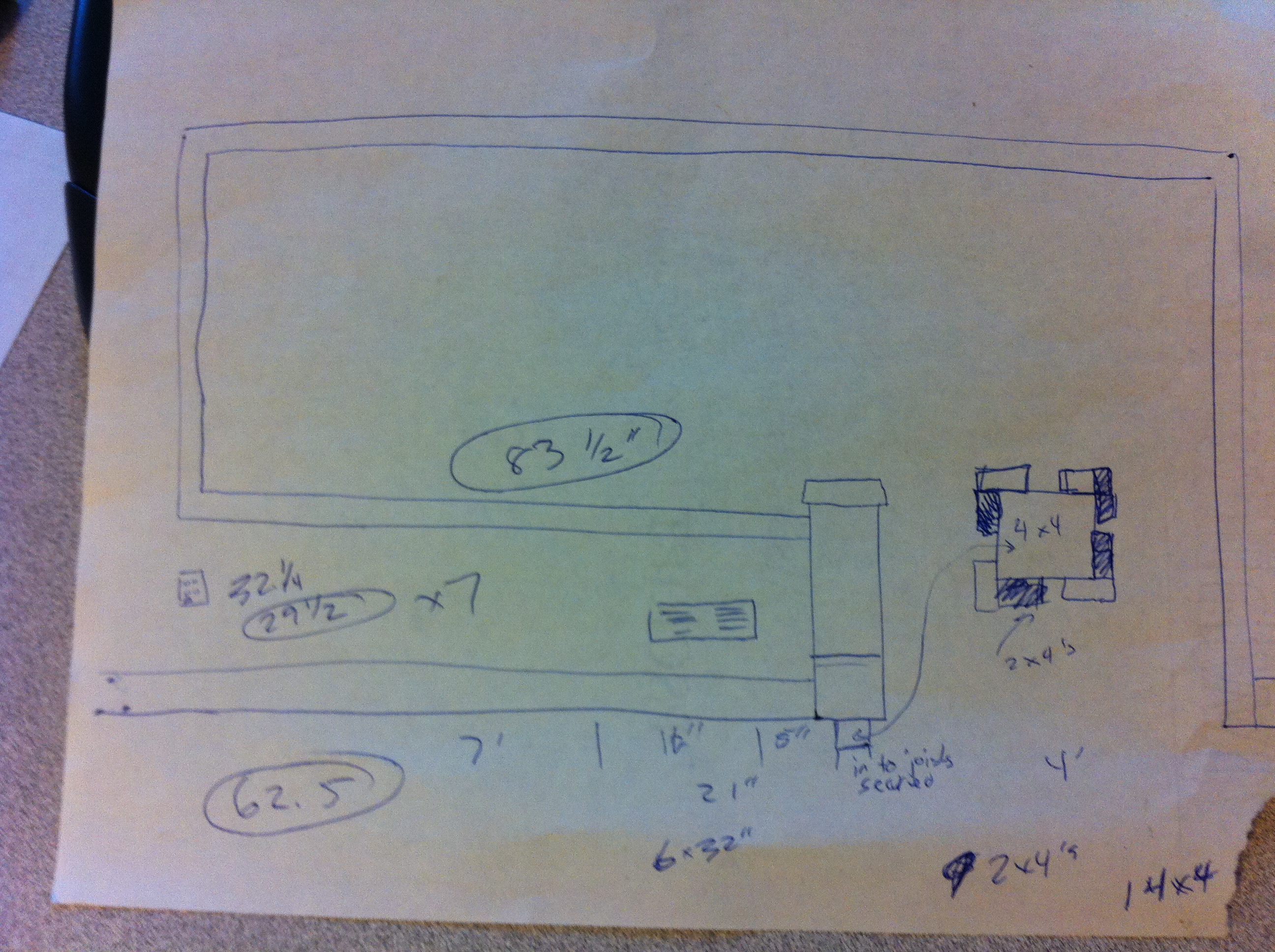 There have been lots of updates in our 37 year old house over the years. Somewhere in its life the previous owners removed the wall that was between the living room and family room. While this great big open space has lots of benefits (more light, more openness) the missing wall had made it really hard to place furniture. Additionally with the family room being used as a play area for this kids lately, the toys get everywhere, something needed to contain this chaos! In our previous home there was a half wall between the kitchen and family room and with this issues in these two rooms, we thought that type of feature would work well here to. So after a quick sketch we decided to make it happen over the Christmas break.

Before getting started with the how, here is the before shot.  As you can see, just a big open space! Be sure to check out those classy Christmas decorations! 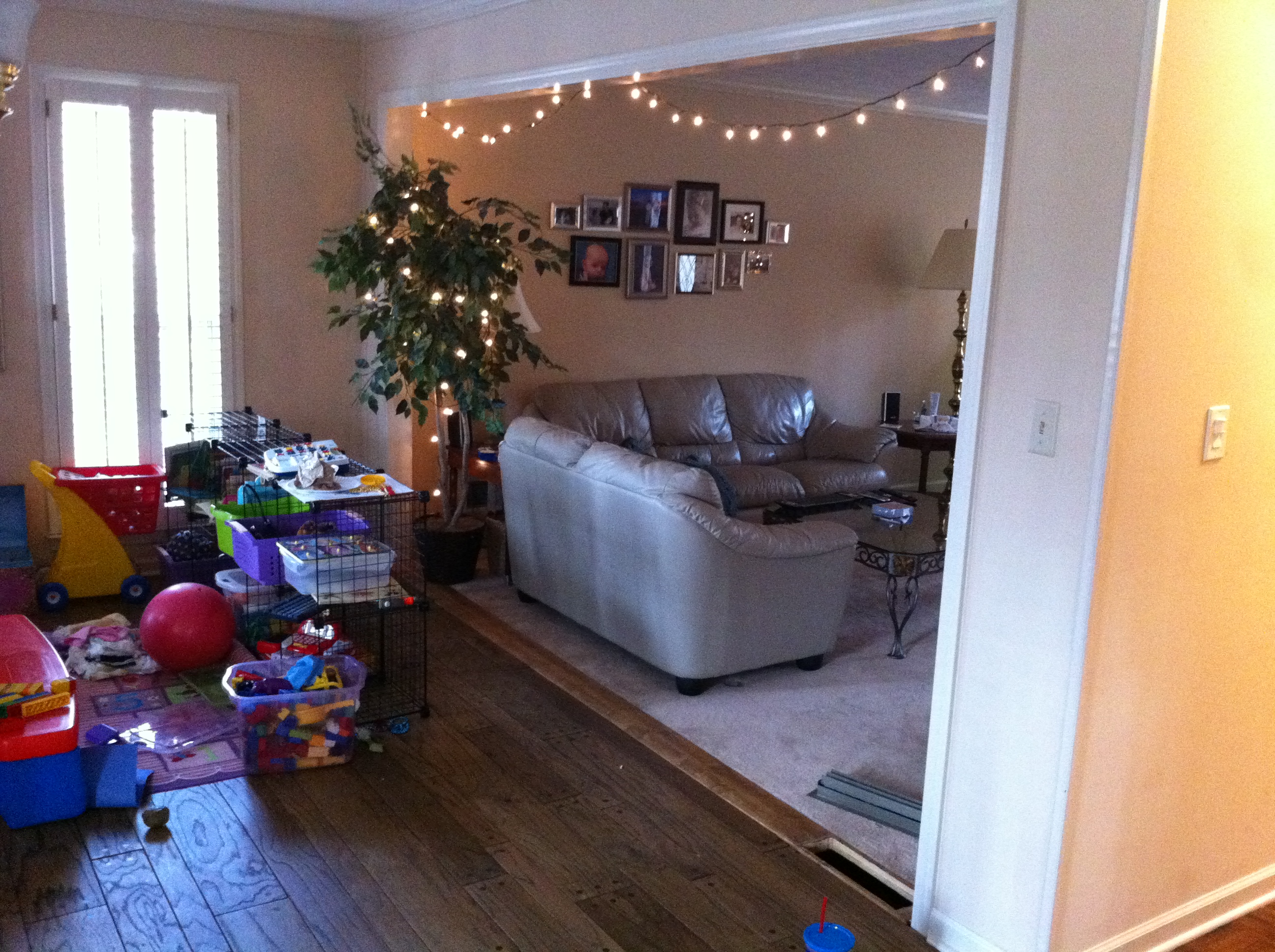 To start this project we needed to remove the floor board and affix a post to the floor joist in order to have a stable wall that didn’t wobble. After pulling up the floorboard we found that the previous owners had just covered up the old cold air return when they removed the wall. This made it really easy for us to nail in a post and install some angle braces for support. Woot! It would also allow me to put the cold air return back in the wall and not have it in the floor anymore, this was a big bonus for the wife who hated the vent in the floor! 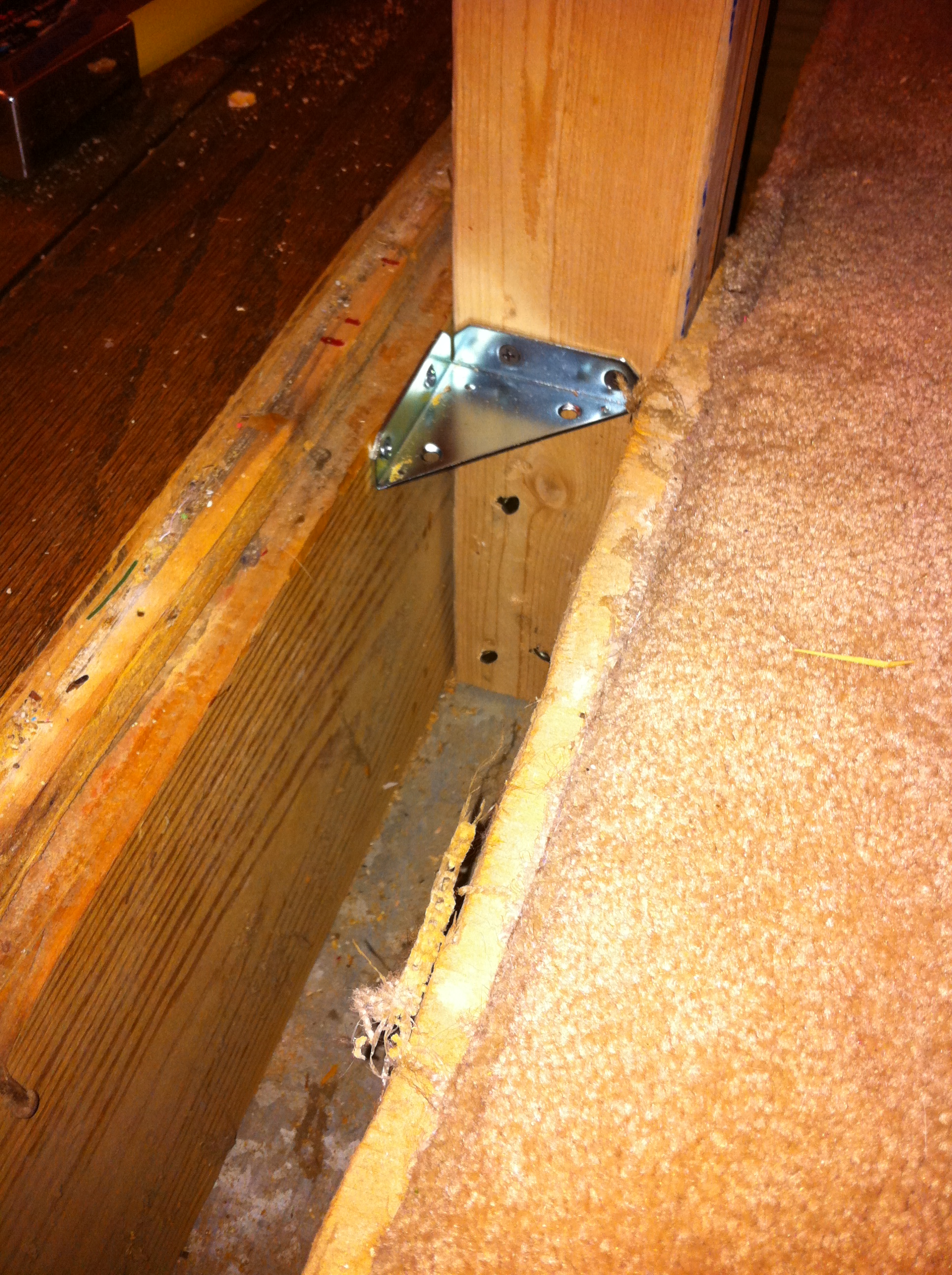 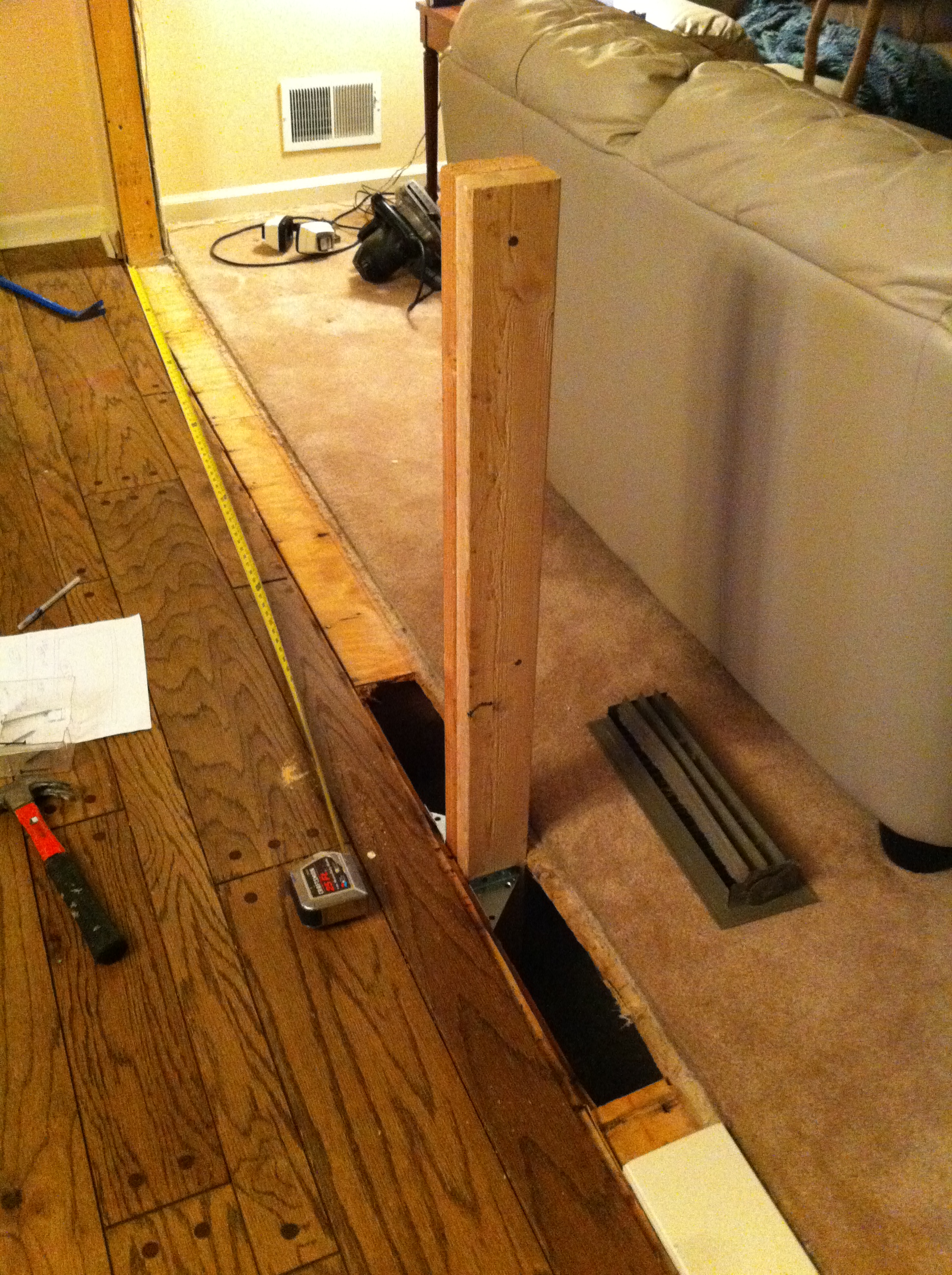 Next up was the simple task of building a standard wall frame and attaching it to the existing wall and the new post. Space was left open in one segment for the cold air return. Also we built up the post to give it the desired size. 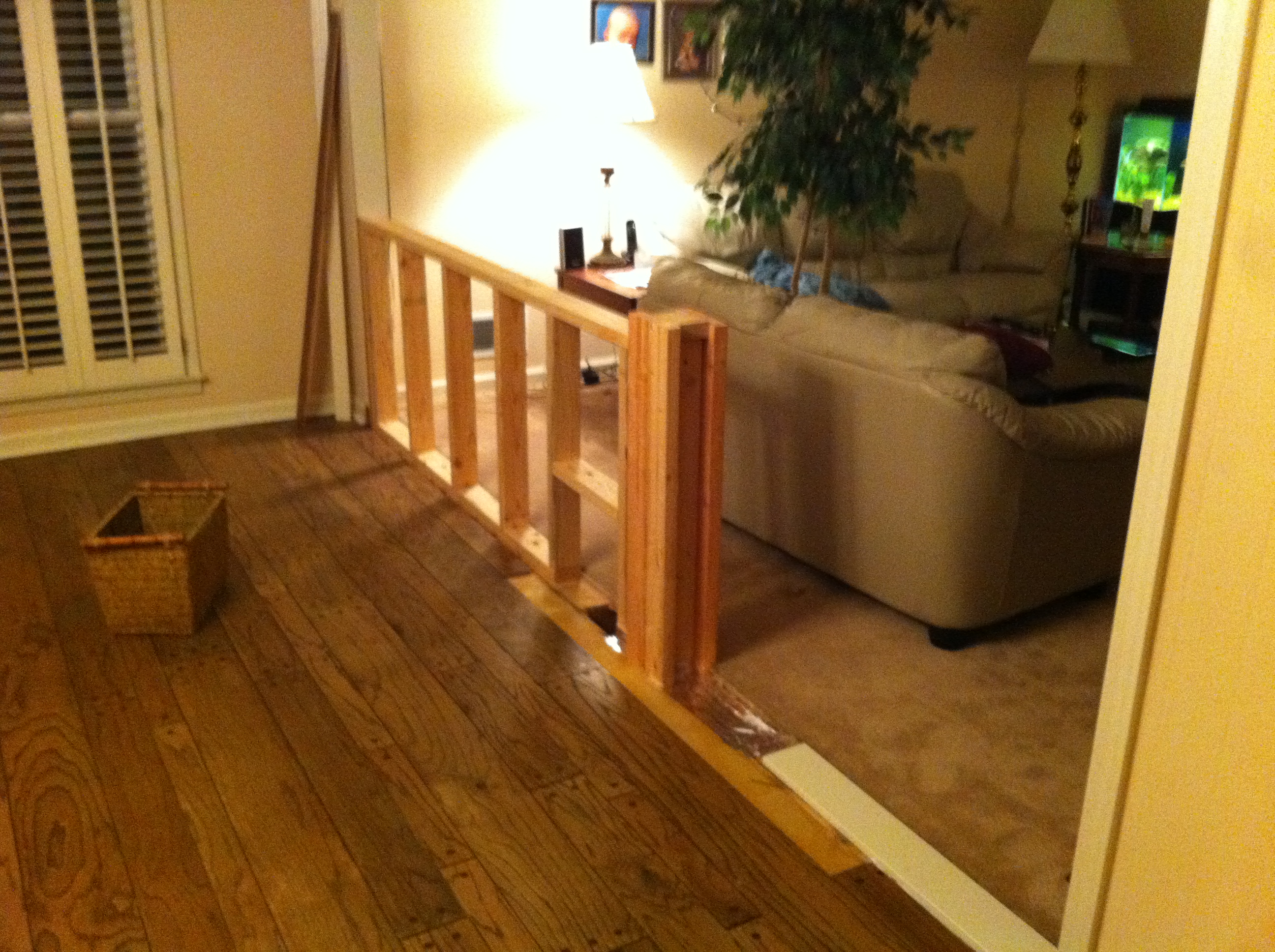 OK, as a geek dad, I could not resist the temptation to run some low voltage wire for TV, Ethernet, and phone.  These runs are from the premise room to the cable TV junction, basement home theater, a new outlet in the new wall, and other places. The reason for doing all this it it will let us replace a bunch of wire that the previous owners ran on the outside of the house! I can’t stand running cable on the outside of a house. 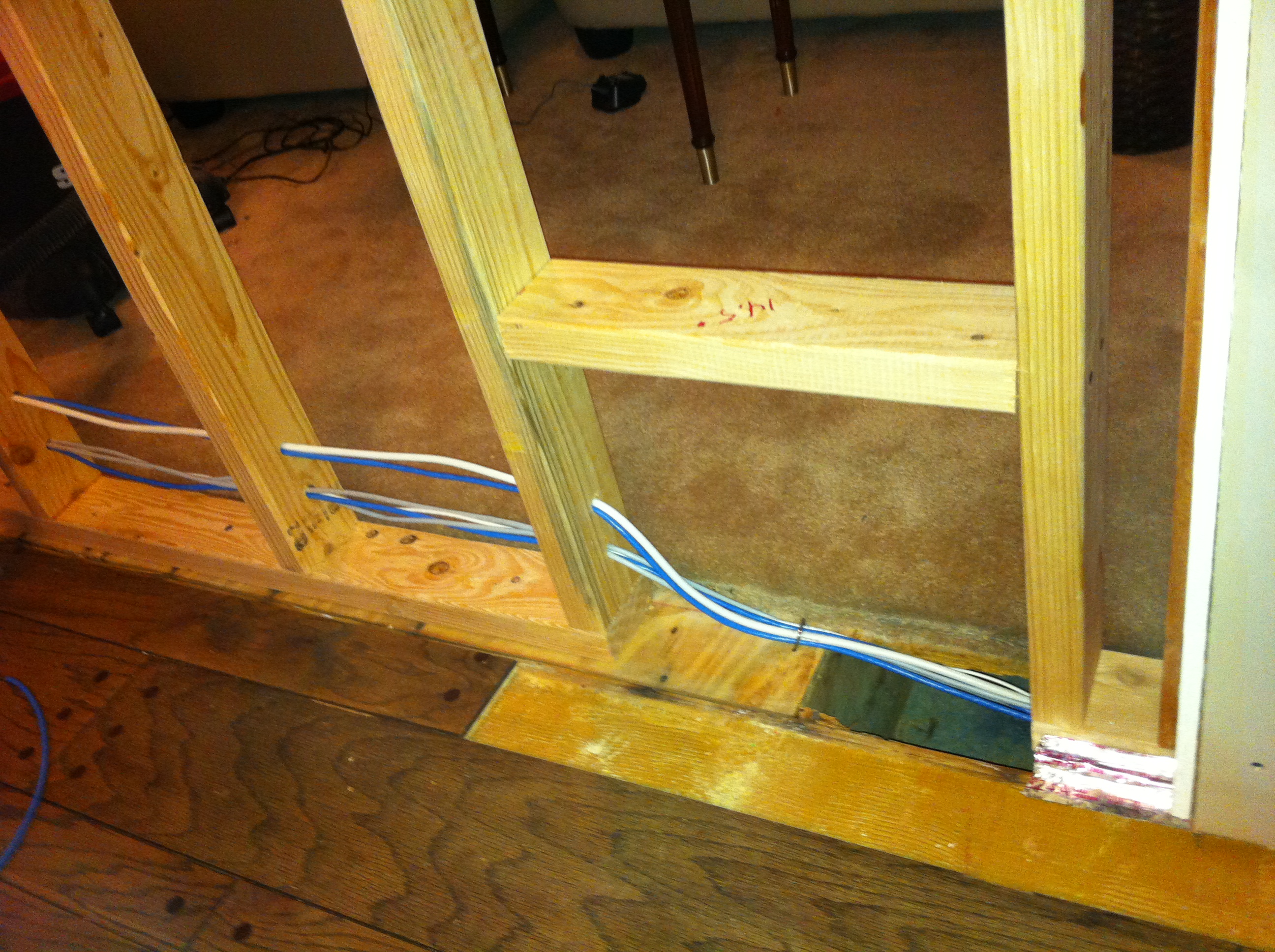 Now for the drywall and paneling. Yes I said paneling! The family room is painted paneling (remember, I told you this is 1970’s house). At Home Depot, we found the closet paneling we could to match what was installed. As a side note, paneling in 2010 is about 1/2 the thickness of paneling in 1974 so we needed to double up. With the drywall up and the top trim and plate installed it was on to mudding, taping and sanding which for me is the the worst part of any job, short of plumbing! 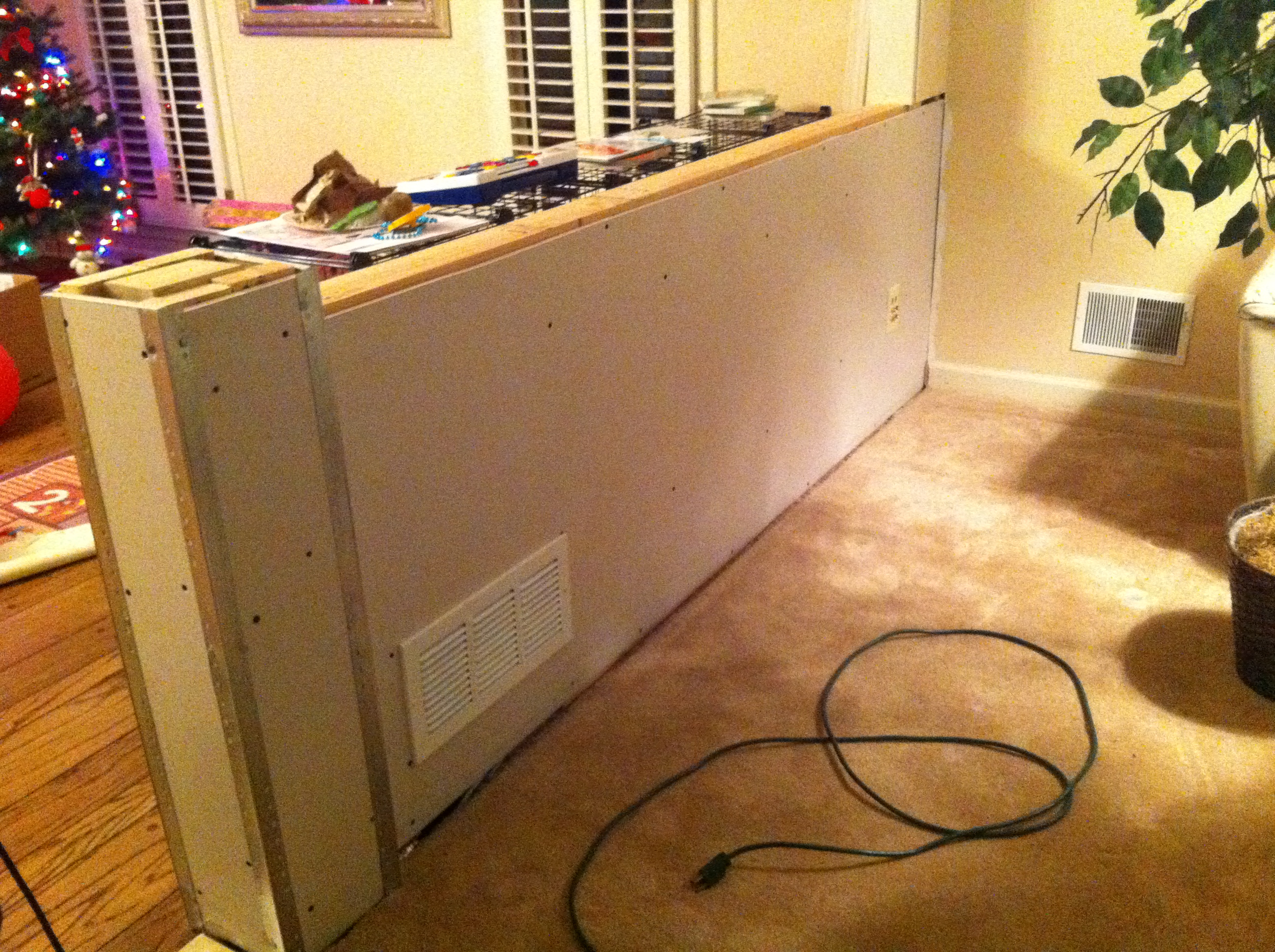 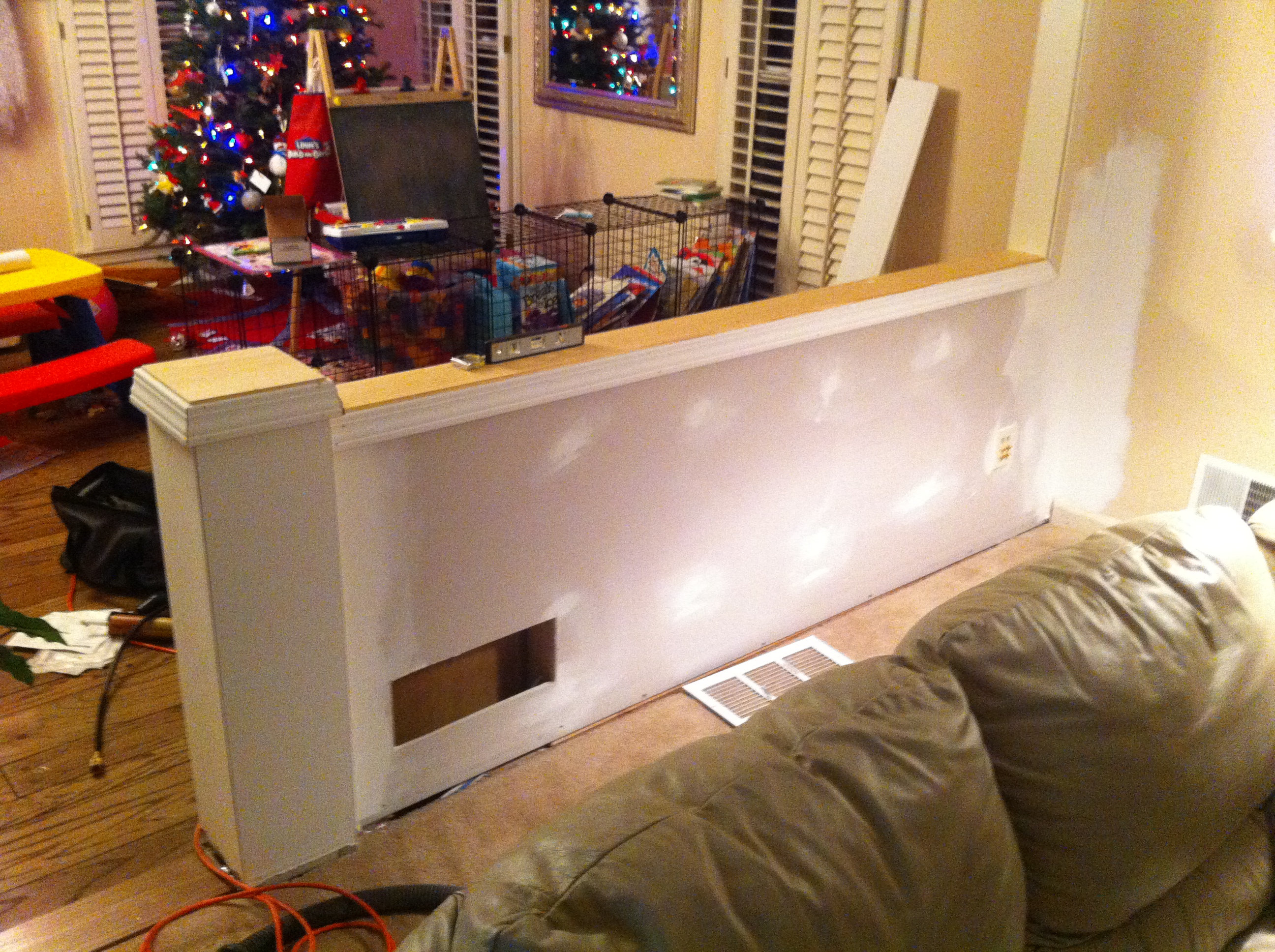 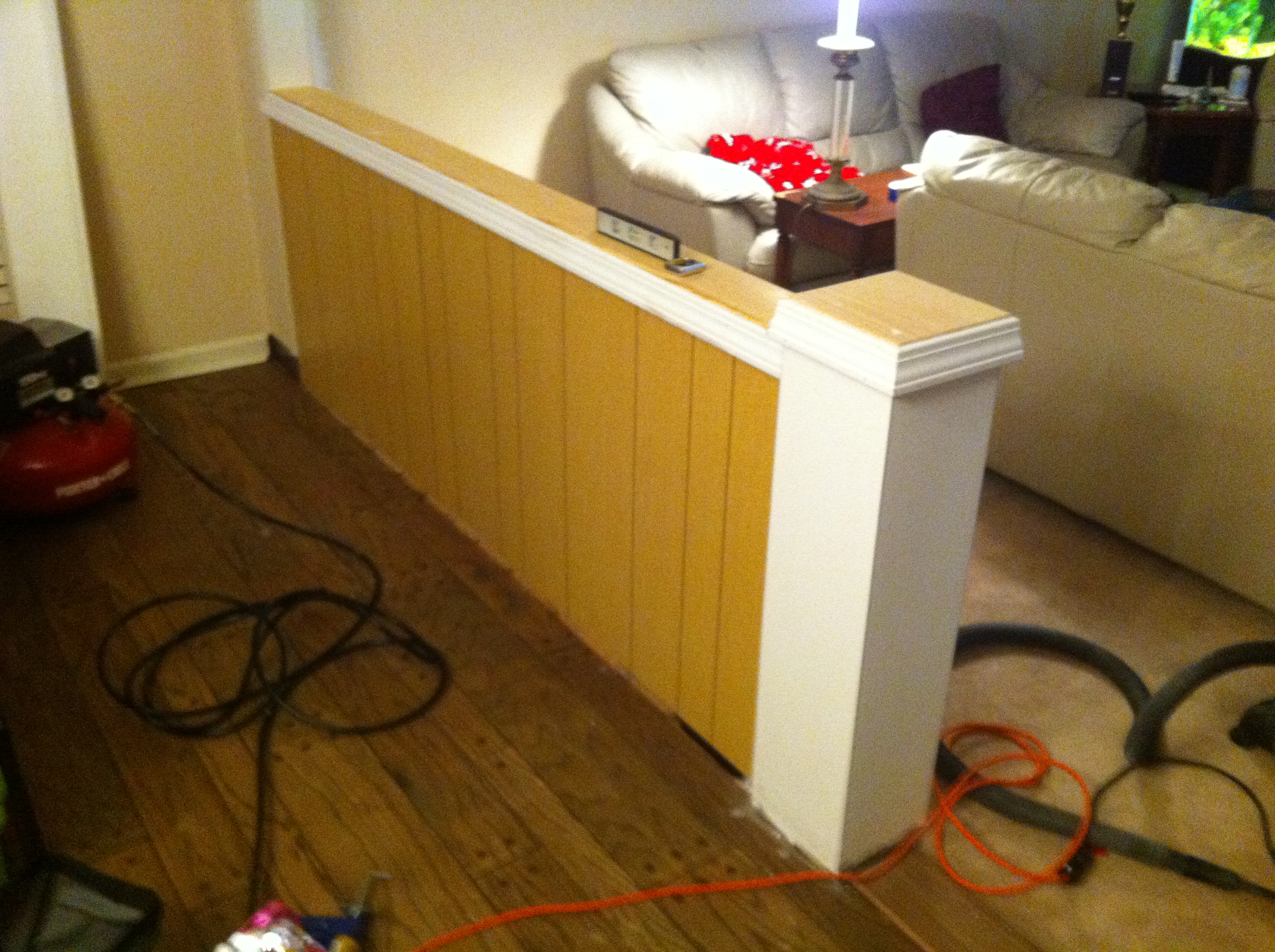 After a few days we are almost there and it is time to prime and paint the new wall and trim! Once again, I must thank the previous owners for their thoughtful decision to paint with the most expensive paint on the planet, Sherwin Williams! Even after coupons and sales the paint still cost us about $100; that was more than all the other materials combined! With the wall painted and the rest of the trim installed, we now have an awesome finished half wall! 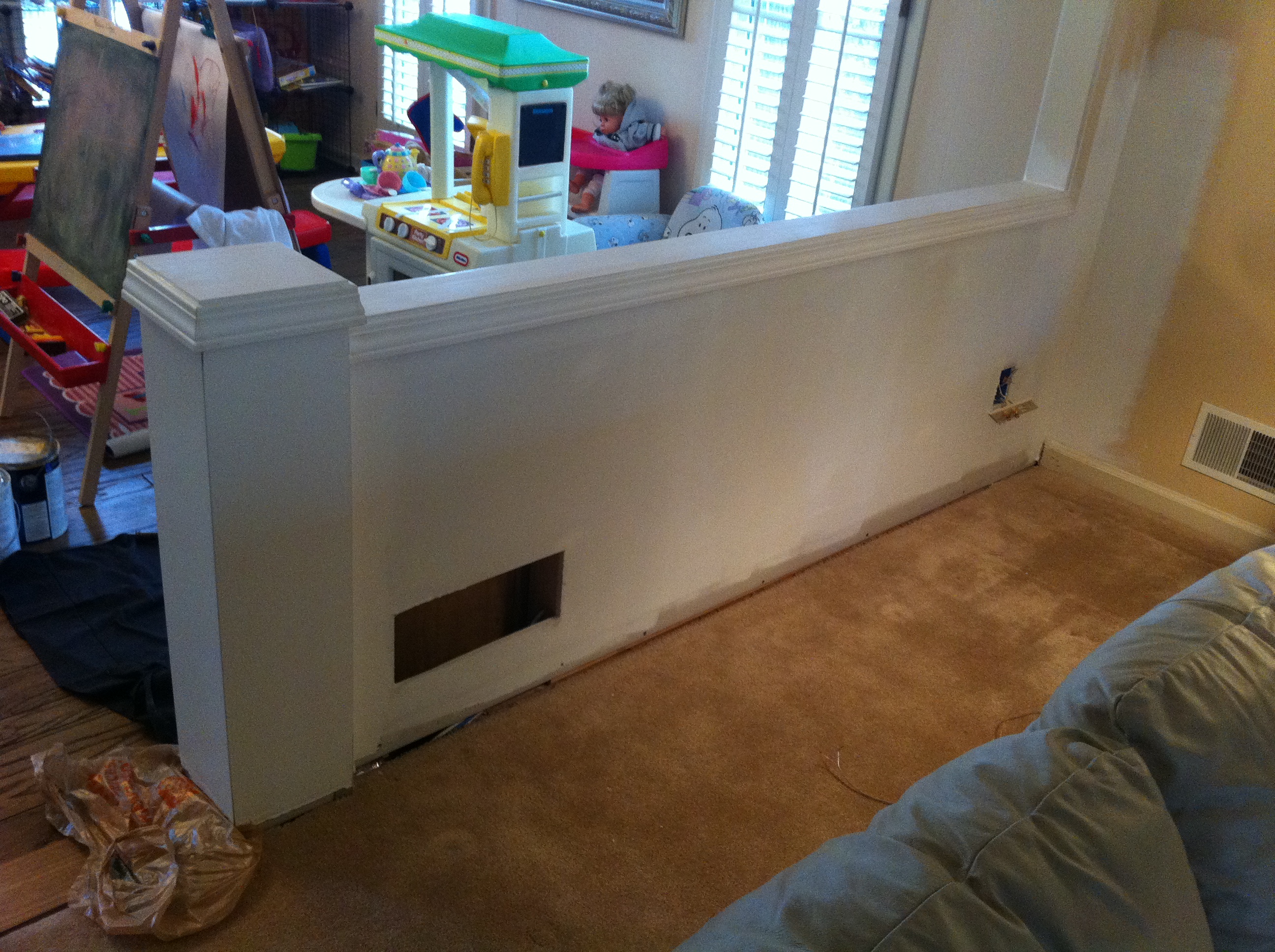 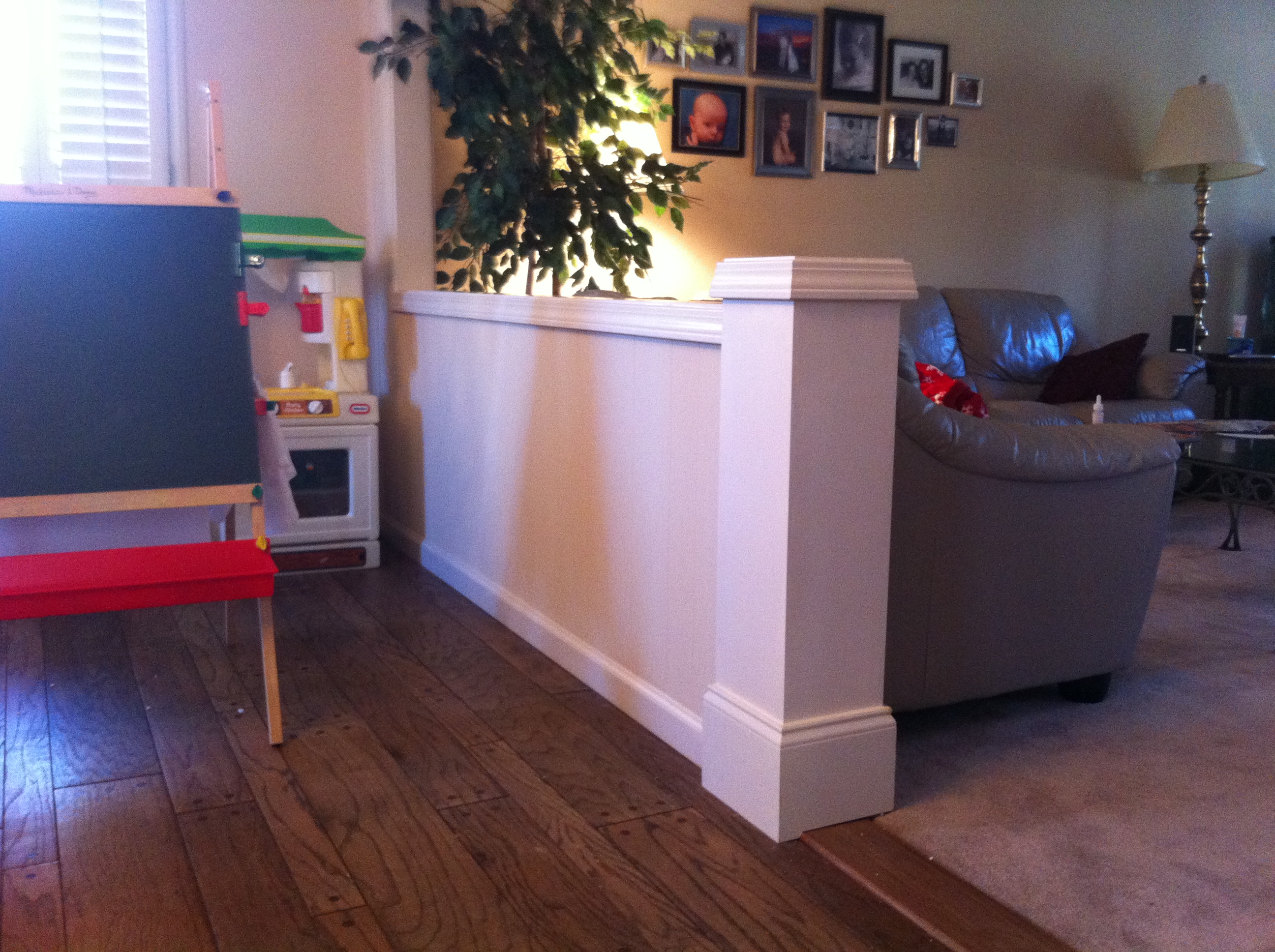 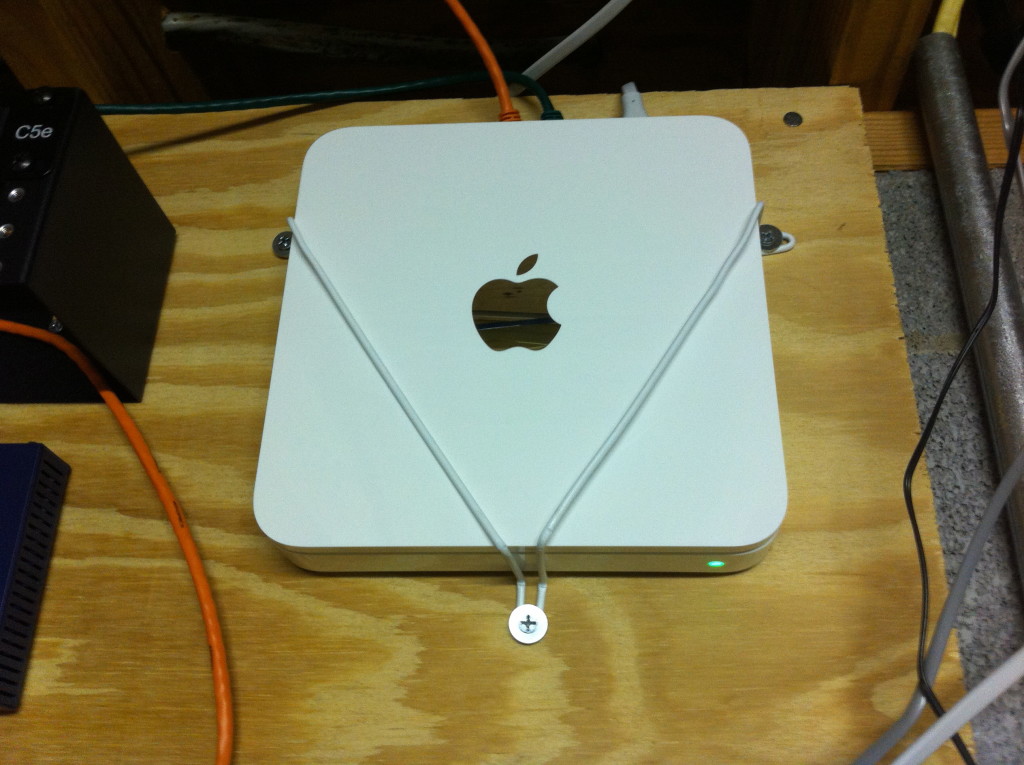 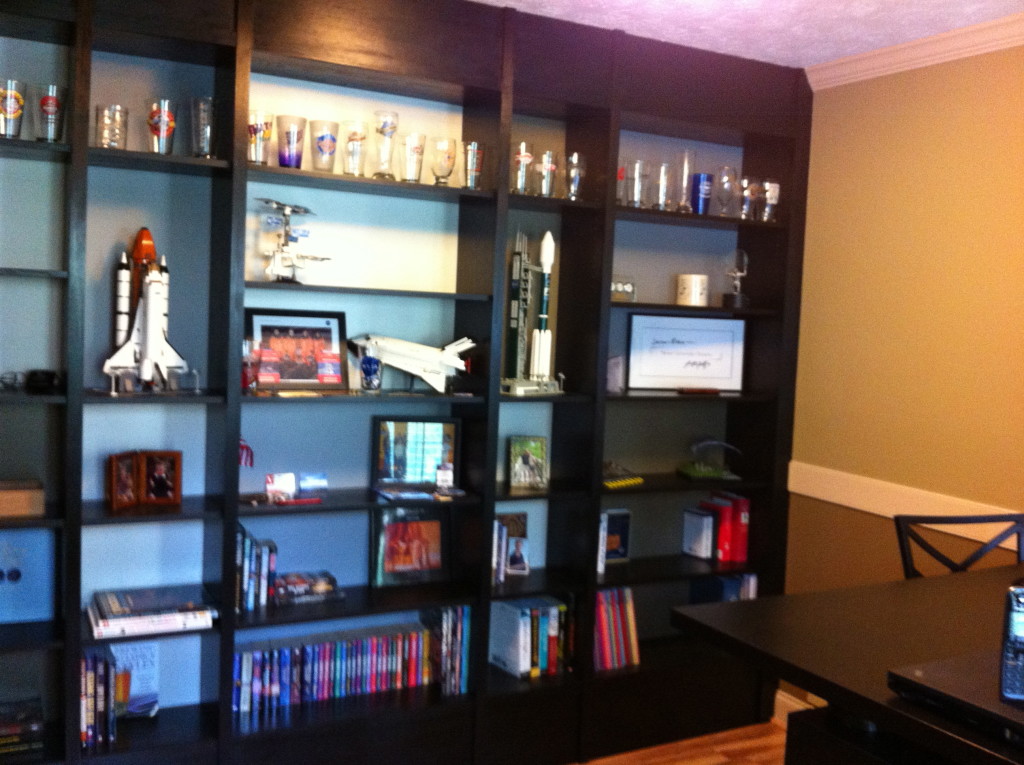