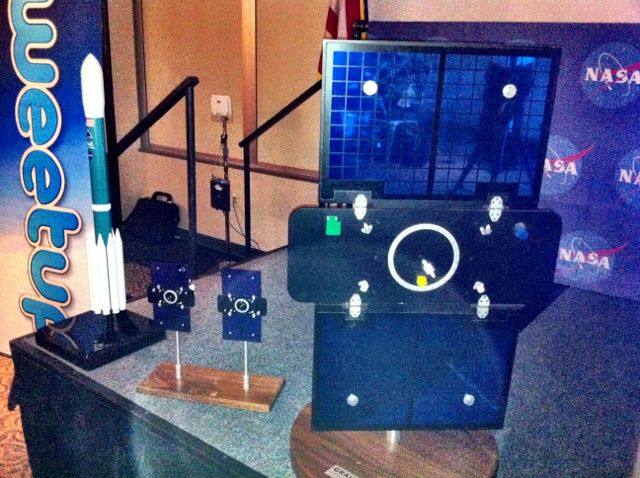 Now I’ve always been a space geek, just look at the path my LEGO building takes, but recently I had the amazing opportunity that turned me back in to a 12 year old boy again. I was invited to attend a NASA Tweetup for the Gravity Recovery And Interior Laboratory (GRAIL) mission which included tour of Kennedy Space Center and viewing of the launch form the NASA causeway. How could I say no?

A tweetup is when people who follow a twitter account, like NASA, meet up in real life. With a NASA Tweetup, the space agency invites a certain number of it’s followers for a behind-the-scenes look at for a high profile event which includes special guests and amazing access to facilities.

The GRAIL Tweetup was held September 7-8, 2011 at the Kennedy Space Center in Titusville, Florida. For this event NASA received more than 825 registrations for the GRAIL Tweetup, but the final group only included 150 people. According to NASA, the members of the group came from across the globe including Australia, Canada, United Kingdom, Spain, and more.

The first day started off meeting other the attendees and NASA media officials. Next up was an amazing tour of the Kennedy Space Center and Cape Canaveral Air Force Station. The first stop for us was the Vehicle Assembly Building (VAB) where we walked the entire floor of this massive building in which we found a special surprise at the far end, the Space Shuttle Endeavor! Next up was the press site where the iconic countdown clock sits. Then it was off to launch pad 39A which will launch the new Space Launch System. Then off to launch pad 41 where prep work was underway for the launch of the Mars Science Lab on a Atlas V rocket. Our last stop was launch pad 17 where GRAIL was sitting a top of a Delta II Heavy rocket. Wow!

After a lunch break it was back to the conference cetner where we heard from a great lsit of speakers including many people working on GRAIL including NASA Administrator Charles Bolden, NASA Launch Director Jim Adams, NASA Engineer Doug Ellison, MIT scientist Dr. Maria Zuber and representatives from Sally Ride Science. Next up were Star Trek’s Lt Uhura and NASA booster Nichelle Nichols and renowned astrophysicist Neil deGrasse Tyson.

Unfortunately after several launch delays I had to leave, I did not get to see the launch. Due to weather conditions the launch was held two additional days until September 10, 2011 when is successfully launched and headed for the moon. GRAIL is a set of twin two solar-powered satellites, GRAIL-A is scheduled to reach the moon on New Year’s Eve 2011 and GRAIL-B will arrive New Year’s Day 2012. They will fly in tandem orbits around the moon to measure its gravity field to answer longstanding questions about the make up of the moon and give scientists a better understanding of how Earth and other rocky planets in the solar system formed. The spacecrafts are also carrying a multi camera digital video imaging system called MoonKAM that will offer middle-school students the chance to request photography of lunar targets for classroom study.